James edges out Simpson at Westlake 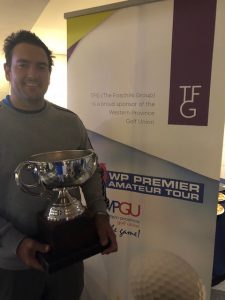 There was a battle between experience and youth at the Premier Amateur Tour – Westlake Open & WP Closed played yesterday, experience prevailed.

Playing in the same group, Westlake’s Elton James and Bellville junior, Sam Simpson held the top two spots after round 1; Elton, at three-under-par, had a slender one-shot lead over Simpson as the afternoon round commenced.

Simpson was not able to close the gap on James as he made three bogeys in his first six holes.  The relatively short par 5, 16th didn’t yield a birdie for him, and James rattled in three birdies in his last six holes to take the title 69-70 (139), and his first win in the Westlake Open and second WP Closed title.

Bellville’s Gerlou Roux 75-68 jumped up the leaderboard to take tied third position with Strand’s Elmo Barnard.  His opening round three-over par 75 was not up to his standards but rallied with the lowest round of the tournament 68 and finished four shots from the winner.

The top four players including Barnard, who carded rounds of 73-70 (143), were the only players to finish the tournament under par.

Defending champion, Chris Wicks was in contention after the morning round 71, but three early bogeys cost him and his chase was over – he finished T9 after carding an indifferent 77.

The next event on the Premier Amateur is the Somerset West Open – a chance for a new course record with the recently revamped course.