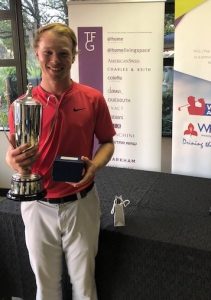 With an opening round of 77, and lying in T14 position, Joshua Smedema pulled himself back up the leaderboard when he posted and afternoon round of 74 total 151 to become another first-time winner on the Premier Amateur Tour.

Smedema was one shot clear of a group of five players to win the Parow Open on Sunday.  It was a day of golf that needed patience. The field had to contend with greens which were running hard and fast, together with a strong north-easterly wind – the scores clearly reflected the weather conditions.

Parow member, Warrick Greentree lead the way after round one – an eagle at the par five 16 helped him to a one-over-par 73 (the lowest round of the tournament) – he finished in the runner-up pack on eight-over-par.