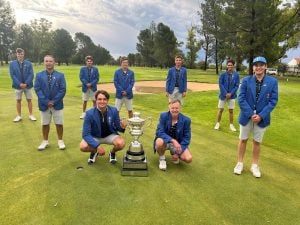 Western Province’s Juniors won six out of six matches to take the honours at the SA Under-19 Inter-Provincial on Wednesday, planting a huge exclamation mark behind an extraordinary 2021 season for the union in national team events.

“With our Juniors winning at Kimberley Golf Club, we become the first union to win all six IPTs since the introduction of the SA Mid-Amateur IPT in 2013. On top of that, our women ended an 18-year title drought when they lifted the WGSA 72-hole Teams Championship title in April.”

The Seniors kicked off the historic clean sweep with a double celebration in the SA Senior and Super Senior IPTs in April.

The run continued when Andrew Georgiou led a youthful team to the winners’ circle in the Premier SA Inter-Provincial at San Lameer Country Club and three-time SA Women’s Mid-Amateur champion Vicki Traut captained the ladies to victory in the SA Women’s IPT at Rondebosch Golf Club in September.

Elton James and his charges keep the purple patch going when the side reigned supreme in the SA Mid-Amateur IPT at Elements Private Golf Reserve in October and the Juniors earned the A-Section title with full points to complete the exceptional achievement.

Western Province began the week as they meant to finish, defeating both Central Gauteng and Gauteng North 7 – 5 in their opening bill.

After a second-round bye, the side routed Ekurhuleni 7 – 5 on day 3 and the following day, Western Province overtook Central Gauteng to take top spot on the log after routing North West 8 – 4 and edging KwaZulu-Natal 6.5 – 5.5.

With thunderstorms forecast for the afternoon of the final round, the Singles and Foursomes sessions were swapped in order to give the teams the opportunity to score the maximum points.

“We only needed to halve with Southern Cape in the final round to win, but we really wanted to finish the week undefeated, so the guys went out with that mindset,” said team manager Peter Little.

Western Province won five games in the Singles and were up in two games and all square in one in the Foursomes session when the siren halted play at 14h30.

“After two hours of lightning, heavy rain and hail and no sign that the storm would be moving on, GolfRSA was forced to abandon play,” Little said. “Since none of our games had gone through nine holes, they were all deemed halves, giving us a 7 – 5 win.

“I am really proud of these youngsters. As the last team to represent Western Province Golf in an IPT this year, the pressure was on, but they took it all in their stride. They simply put their heads down and got on with the job. We fostered a fantastic team spirit, and that above all, kept them motivated and inspired to push as hard as they could in every round.”

Matthew Lotz edged Central Gauteng’s Stefan Jacobs to clinch the Most Valued Player honour for Western Province. The Milnerton junior finished the week with 10 points, accumulating 5.5 in the Singles and 4.5 in the Foursomes.

De Swardt was over the moon with the Junior team’s performance.

“Massive kudos to the young men on an emphatic win. They performed incredibly well under pressure and sealed what has been a magnificent year for Western Province Golf,” he said.

“To win every IPT in single calendar year is absolutely epic and what is really remarkable is that we lost only three foursome games in 22 matches. That really set our teams up for success.

“Given our “far South” location, it counts against our players with most of the counting events for the rankings held up-country, so they don’t get enough opportunities to hone their skills against the top players in South Africa.

“Hence, we established our own Premier Amateur Tour and a robust Junior Event circuit featuring over 35 events in 2021, which meant that our players were competing almost weekly. This has culminated in a very healthy competitive spirit and camaraderie amongst the players across all age groups.

“I also believe that the pandemic has contributed to a measure of our success in that the isolation of individuals and teams has strengthened the team ethics, which is an element that our players have embraced this season and it shines through in the ethos of WP Golf’s team performances.

“At Western Province Golf, our clear and transparent selection criteria and policy is recognised and accepted, and it rewards in-form players. It serves as a good measure to show players where they stand throughout the year and this process not only enables them to prepare themselves, but it fuels their ambition to represent Western Province Golf.

“Recognition also has to be given to the immense work done behind the scenes by our Executive Team, our sponsors, the parents, spouses and partners and our golf clubs, without whom all this is simply would not have happened. I am so proud.”