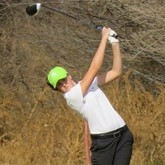 The 16-year-old Gauteng golfer fired three birdies in the first round to race to the top of the pile with and opening two-under-par 70. Heading into the final round, she led by two shots from local favourite Lynne Behagg, Kaylah Williams from Western Province, Chloe Royston from KwaZulu-Natal and reigning Nomads Girls SA Rose Bowl champion Kaiyuree Moodley from Gauteng.

The quartet tried to close the gap in the final round, but Mistry was untouchable.

She overcame a bogey start with a birdie at the second and reversed another drop at six with a birdie at nine to turn level par. After a birdie at 10, she racked up further gains at 13, 17 and 18 to seal her fourth victory this season with a stunning 68.

Moodley and Williams closed with rounds of even-par 72 to tie for second on two over and Gauteng’s Symone Henriques shot to fourth at four under with a final round 70.

The GolfRSA Elite Squad player put her success down to great ball-striking and a hot putter.

“It rained throughout the first round, which made it a bit tougher to score, but the weather was perfect with just a little wind to make things tricky in the final round,” said Mistry. “I was striking the ball really well over both days and I only missed five greens in 36 holes. And the putter also came to the party.

“I want to thank Boland Ladies Golf Union for hosting us at such a fantastic venue. I really love Hermanus golf course. You can see the mountains from every hole and the ocean. It’s not that long, but it has plenty of challenges and it rewards good shot making and putting. Coming from Gauteng, it was a real privilege to come back to defend my title.”

In the other divisions, Valda Ford won the B-Division Gross and Rene Myburgh the Stableford C-Division.

Ford from Ruimsig carded rounds of 85 and 84 to win by one stroke from Denise Codrington on 169, but the Somerset West golfer edged out Ford for the Net title on 144 from her 13 handicap.

Myburgh, a 27-handicapper from Gansbaai, scored 67 points with rounds of 32 and 35 to defeat Celeste van der Westhuizen from Stellenbosch by two shots.

Bianca Wernich from Stellenbosch won the Closed A-Division by four strokes from Lynn Behagg, who took the honours in the Net Division.