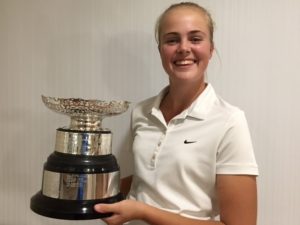 It’s not over till the final hole!

Ekurhuleni’s Caitlin McNab took a slender two shot lead from Kaylah Williams into her second round at the WP Women’s Amateur Championships; she took her lead to three with an early birdie, and when Williams fell back further when she opened her final round with a bogey and double bogey, McNab was now in the lead by six.

When McNab stood on the 17th tee box she could not forsee the drama that was to unfold. A double bogey on the par 5, 17th put a dent into her lead; after signing for a quadruple bogey on the par 4, 322metre, 18th her chance to win the championship was over.