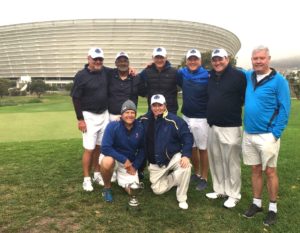 The finals of the Masters League took place in gloomy and cold conditions at Metropolitan on Sunday.  This is the second League Trophy picked up by King David Mowbray in as many weeks – they are also the Mid-Amateur League champions.

King David Mowbray were clearly too good for their, neighbours, Rondebosch.