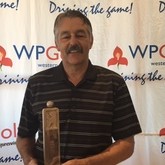 In stark contrast to yesterday’s extreme heat, there was a brisk North wester blowing and a much cooler start to the final round at the WP Senior Championships at King David Mowbray, yet several of the contenders weren’t able to use the conditions to their advantage.

And after nine holes it was becoming evident that it could be a two-horse race to the winner’s trophy.

Opening his final round with a birdie, and holing another at the par 5 6th, overnight leader, Francois le Roux held on to his one-shot lead, this time from SA No1 ranked senior, Steve Williams and not from Garth McGimpsey.

McGimpsey opened up his round with a bogey and, with further drop shots at the 7th and 8th left him five shot off the lead and effectively out of the running. McGimpsey finished his tournament with rounds of 71-79 total, 147 and in a tie for eighth position.

So, despite a closing bogey, Le Roux signed for a two-over-par 74 final round to finish three clear of Mzuyanda Zingela, and lift the Senior Championship trophy for a third time – 70-74 (144)

As the chasing pack fell away it was, Zingela, the SA No.3 ranked senior who moved up the leaderboard and took the runner-up position behind le Roux with rounds of 72-75 (147).