Level par at the halfway-mark at WP Masters 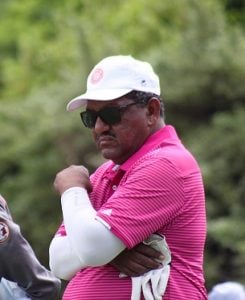 Both players had a flurry of birdies to cancel out their bogeys and carded level par 72s.

Lying two shots back are the Cape Winelands winner, Andre van Dyk, and The River Club’s Richard Bruyns.
Royal Cape’s Brian Mampies is still in the mix with his 75, together with Ian Smith (Killarney) and Casper de Bruin (Ceres).