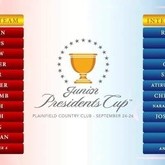 The PGA TOUR and American Junior Golf Association (AJGA) have finalized the official selection for the Junior Presidents Cup, which is set to take place Sept. 25-26, 2017, at Plainfield Country Club in Edison, New Jersey, just days prior to the start of the 2017 Presidents Cup at Liberty National Golf Club in Jersey City, New Jersey.

Teams will be led by Honorary Captains Jack Nicklaus and Gary Player, whose presence will ensure an unforgettable experience for each junior participant. Each honorary captain will be supported by a captain, who will handle the primary duties during the competition, including the creation of the daily pairings and conducting the draw of the matches. The U.S. Team will be captained by 2001 PGA Championship winner David Toms, while the International Team will be led by 2008 Masters champion Trevor Immelman.