Maiden win on the PAT 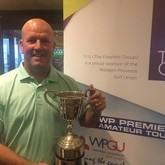 Never a winner on the Premier Amateur Tour (PAT), Cameron Johnston held on to his first round lead to win his first PAT event at the Milnerton Open. It is hard to imagine a player of his quality not to have won an event on the PAT tour.

With rounds of 69-70 (139), Johnston held off Weyers Janse van Rensburg his Mid-Amateur teammate, to win by two strokes. Van Rensburg, no stranger to Milnerton, holed 12 birdies but he wasn’t able to keep the bogeys off his card and finished on three-under-par 71-70 (141).

Adrian Ford had a nightmare start to his tournament – after carding an opening round 80 – found his rhythm in the afternoon to improve by 11 shots for a 69, but there was just too much ground to make up on the leaders.

The next event on the Premier Amateur is the Steenberg Open – Sunday 10 September.