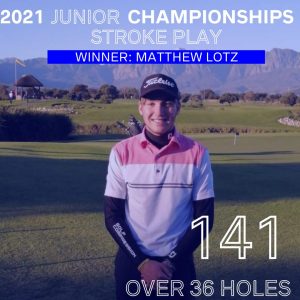 Beautiful winter weather greeted the large field participating in the prestigious WP Junior Championship Qualification at the Strand Golf Club. This tournament brings together the most talented junior golfers in the Western Province.

The stroke play component, on the Thursday, was keenly contested with a permutation of 4 possible winners playing the final hole. In the end, a birdie on the par 5 18th, separated Matthew Lotz (Milnerton GC) from the chasing bunch. Matthew had a 71 in the morning session followed by a 2 under 70 in the afternoon.  The morning round characterized his usual steadiness with the afternoon round having 6 birdies, 2 bogeys and a double drop, at the par 4 6th. This win is a continuation of the good golf being played recently by Matthew.

A fine 67 gross in the afternoon round saw Bobbi Brown (Steenberg) propel herself up the field to finish a close 2nd together with Jack Buchanan (Milnerton) on 2 under par 142. Bobbi Brown was lying tied 10th after the morning session but impressed with 6 birdies in the afternoon. Jack Buchanan (WP Junior Golf ranking of 1) lead the morning session with a great 68 but followed this with a disappointing 74 in the second round.

Other notable performances in the afternoon was Murray Boast (68), James Boustead (69) and Taimur Haider Malik (69).

To view the over all stroke play results click here

The other division results were – Quewen Botha (Atlantis), continuing his good form in the B division with a 77, Jude Samuels (Royal Cape) 38 points in the C division and Henru Walters (Durbanville), a runaway winner in the Under 13s on 78 gross.