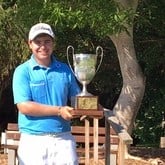 Filippi defeated Therion Nel 3/2, Siyanda Mwandla 1 up, came from behind to beat Elmo Barnard 3/2, and KZN’s Malcolm Mitchell 2/1 to take his spot in his second final. Luca was the losing finalist to Jovan Rebula in the 2016 Championship at Clovelly Country Club.

The final pairing teed off and at the halfway mark, Kyle was two up. That lead was reduced to one when Filippi sank his twenty-foot birdie putt on the first hole.

With four bogeys in five holes and Filippi was clearly up against it, and losing his way. Filippi pulled two holes back after holing out with his second shot on the par 4, 8th and a birdie on the 9th.

Even after picking up some momentum, Fillippi still couldn’t gain the upper hand. A chip-in birdie on the 13th reduced the deficit to three holes, but by now Filippi was running out of holes.

The par 3, 15th sealed the win for McClatchie. Filippi’s tee shot flew the green and was unable to get up and down to match McClatchie’s par.