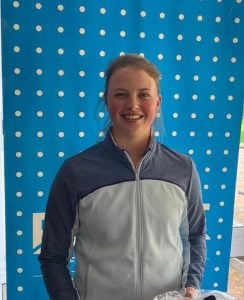 Intermittent showers, strong cross winds and extremely cold conditions did not deter Megan Streicher (Swellendam) from winning the 3rd event in the 4th edition of the Bridge Fund Managers Junior Series (BFMJS) that took place at the Strand Golf Club.

By winning the Strand leg Megan has qualified for the regional South finals of the BFMJS, where she will be playing for the opportunity to compete at Pinehurst in July 2021. The other qualifiers thus far are Matthew Lotz (at Atlantic Beach) and Murray Boast (at Royal Cape).

The Bridge Fund Managers Junior Series launched in 2017, is managed by the SA Golf Development Board and endorsed by GolfRSA. Open to boys and girls in the U13 and U19 divisions, it is played across 18 tournaments at leading courses countrywide.

After a count-out for 2nd place on gross 76, the positions were filled by Travis Procter (Durbanville) 2nd, Danie Jooste (De Zalze) 3rd and followed in 4th position by Jack Buchanan (Milnerton).

The B division was won by local member Matthew Arendse on 85, and the C Division by Brantem Kiego (Kuils River GC) on 37 points. The Under 13As was won by Henru Walters (Durbanville) on 81 and the Under 13Bs by Isabella Heber on 34 points.

The next BFMJS event takes place at Royal Durban Golf Club on the 20th September.

Further tournaments are scheduled for

Visit juniorseries.bridgefm.co.za for the full schedule and entry mechanism, or contact Peter Little of the SAGDB on littlegolfers2@gmail.com.