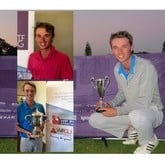 It is with sadness that we inform you of the untimely death of Michael Sherriff.  Michael lost his life in a car accident over the Easter weekend. Our thoughts and prayers are with his family. Michael’s loss will be felt by all at WP Golf.

Michael started his competitive golf at the Mupine Mashie course in Pinelands and progressed through the junior ranks. He was selected to represent WP at the Junior U19 Inter-Provincial, 2013, 2014 & 2015.

Every golfers ambition – to play Premier IPT.  Michael received his Premier IPT No. 138 in 2015, and followed that with his selection in 2016.

Michael created some PAT history in 2016. After finishing 2nd on the 2015 PAT Order of Merit, Michael, almost doubled last year’s points and amassed 1205.75 points to seal this year’s win, the most points by a PAT Winner in the tour’s six-year history.

Sherriff played in all 16 tournaments this year; he broke par in 9 events; he won 4 events – Westlake, Kuils River, Rondebosch and the PAT Finals; he was runner-up twice, and only twice finished outside the top 10 on the final leaderboard – and had a stroke average of 71.7 per round.

A competitor till the end…