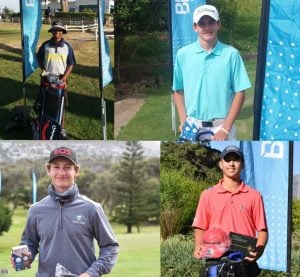 Mitch, Jack, Justin and Craig go through to BFMJS qualifier

This past week has seen four qualifying events in the 2020/2021 Bridge Fund Managers Junior Series (BFMJS), this being the 4th edition of the BFMJS.

During August two events were held locally, with Matthew Lotz (Atlantic Beach Links–a 66 gross) and Murray Boast (Royal Cape-a 68 gross) winning. This was followed in September with the Strand (Megan Streicher-a 73 gross) and Robertson (John Rabie-a 72 gross). This past week saw events being held at Kuils River, Bellville, Clovelly and Erinvale. The weather at all these events was a test of concentration and mental stamina.

After a number of runner-up finishes Jack Buchanan (Milnerton) won at Bellville with a 2 under par 70. His round included an great eagle 3 at the par 5 15th. Jack continued his great form with a comfortable win 2 days later at Clovelly CC. A steady 4 birdie, 1 bogey round was enough to do the business. Justin Behrens (Atlantic Beach Links) finished on level par – Justin therefore qualifies for the regional finals due to Jack qualifying at Bellville. Among the runners-up at Clovelly was Murray Boast and Travis Procter, both on 73.

A beautiful Erinvale was the venue on Sunday, the 1st November. Yet another full field assembled to tackle this iconic course. Murray Boast (Milnerton) was the runaway leader with two holes left but an unfortunate quintuple bogey at the dangerous 17th left him finishing on 2 under – his round included 2 eagles and 4 birdies. Craig Jacobs, who has recently shown model consistency, won with an excellent 68. Jack Buchanan showed that he is still in form finishing on 71.

Another highlight has been 11 year old Minjun Heo (KD Mowbray) who has dominated the under 13 division with victories at all 4 events – Kuils River (75), Bellville (74), Clovelly (76), Erinvale (73). Outstanding performance from such a young golfer!

By winning a BFMJS leg a player qualifies for the regional SOUTH finals of the BFMJS, where he/she will be playing for the opportunity to compete at Pinehurst in July 2021.

The Bridge Fund Managers Junior Series launched in 2017, is managed by the SA Golf Development Board and endorsed by GolfRSA. Open to boys and girls in the U13 and U19 divisions, it is played across 18 tournaments at leading courses countrywide.

Visit https://juniorseries.bridgefm.co.za/ for the full schedule and entry mechanism, or contact Peter Little of the SAGDB on littlegolfers2@gmail.com.