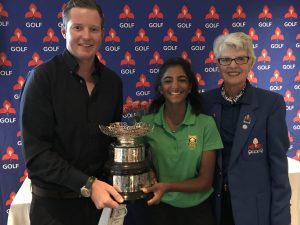 Lying in third spot after round 1, Moodley put herself back into contention with an eagle on the par 4, 2nd hole, and with a further three birdies on 5, 15, & 16 she was tied for top spot with Glenvista’s Symone Henriques on two-under par total 142.

Coming off her win at the recent Nomads SA Girls Championships at Langebaan, defending champion, Kaylah Williams, had an indifferent tournament by her standards- T8 77-75 (152).