Moolman wins by five at Steenberg 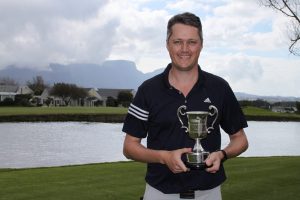 Nobody could match Louis Moolman’s masterclass of putting in the final round at the WP Mid-Amateur Championships held at Steenberg Golf Estate on Friday.

A five-under-par, 67, the lowest round of the tournament, gave Gauteng’s Louis Moolman his first Mid-Amateur victory for 2018.  He was five shots clear of his playing partner, Derek Scullard.  Both players shared the halfway lead on four-under-par.

Despite an early bogey on the par 3, 2nd hole, Moolman made light work of the fast greens and rattled in six birdies to for his convincing win. 68-67 (135).

KZN’s Derek Scullard 68-72 (140) saw his title slipping away with a costly double-bogey on the par 5, 5th, and wasn’t able to match the putting skills of Moolman.

Southern Cape’s Ivan Williams rebounded after an indifferent first round 73, to finish on three-under-par total 141 (73-68).

Moolman’s win has escalated him up to the top spot on the GolfRSA Mid-Amateur rankings.

The chances of a Hole-in-One for an amateur golfer are approximately, 12,500 – 1.  Milnerton’s Jason Plumby grabbed his chance and holed out on the par 3, 175m 2nd hole.