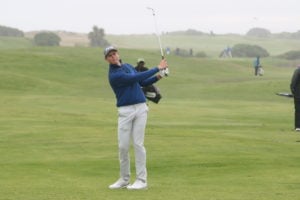 The cream of South African Amateur golf is in Cape Town for the WP Amateur Championships at Milnerton Links 23-28 April 2018.

The players are competing for the Dowie Dunn Memorial Trophy.

Defending champion, Nicholaus Frade, is in the field, together with the three national No. 1 ranked players;  Wilco Nienaber, Open Amateur No. 1, Jayden Schaper, Junior No. 1 and Gerlou Roux, Mid-Amateur No.1.

The early starters contended with drizzle and mist, but the afternoon round picked the short straw with  the weather, struggling with a brisk north wind – there was no sign of sunshine!

GolfRSA’s No. 1 golfer, Wilco Nienaber took advantage of his early tee time to make a statement with his opening round of 9 birdies and a lone bogey (8 under par).  He takes a three-shot lead over Matt Saulez, and is a further five shots ahead of third placed, Christo Lamprecht Jnr.

Karabo Mokoena, the current Boland Amateur Champion, was hoping for his form to continue with his his win from Worcester last week. He carded a round one-under-par 69.

Nicholaus Frade will struggle to make tomorrow’s cut as he battled with the afternoon winds to open the defence of his title with an eight-over-par 78.