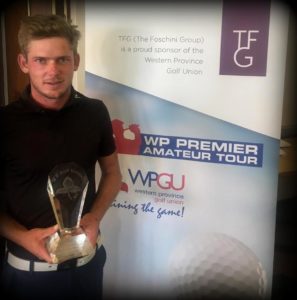 Durbanville’s Chris Wicks joins the list of winners of the Premier Amateur Tour.  Wicks played in all 16 events, winning two, was runner-up in three, finished third in one, and was placed fourth twice.

Chris amassed a total 1007 points, and is now one of only 4 PAT winners (JP Strydom, Ian Snyman & Michael Sherriff) to break the 1000 point mark.  Scoring an average score of 73 per round, Chris carded his lowest winning score 139 at Parow, and his lowest 18 holes was a 65 at Metropolitan.  Barring three tournaments he never finished out of the top ten.

And so to sum up the 2017 Premier Amateur Tour…

Give or take per round: