Pearce powers to victory at Durbanville 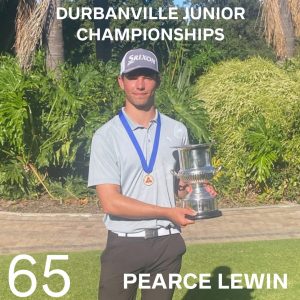 Despite being windy at times, the DURBANVILLE Junior Championship showed the depth of junior golf in the Western Province. The first 15 players all recorded 75 gross or better.

The course was in truly great condition with especially the greens being immaculate.

16 year old Steenberg Golf Club member, Pearce Lewin, put in a performance that ranks as one of the finest at a WP Junior Golf event – a remarkable gross 65 that included 7 birdies, an eagle, and 2 bogeys! In recent times only Tyran Snyder’s effort of 64 in the 2nd round of the WP Junior Championship, at the Strand in 2019, has its beating!

Pearce played the 1st nine in a breathtaking 30 strokes – 4 birdies and an eagle at the par 5 6th. The 2nd nine started with a stutter, drops at the par 5 11th and par 3 12th, but 3 birdies coming home saw him return that fine 65. Pearce’s last victory was at the 2021 STRAND Junior Championship.

Jack Buchanan (Milnerton), currently ranked the 3rd best U19 junior in South Africa, put in his usual high standard performance – 3 birdies, an eagle and 3 bogeys for a fine gross 70. Jan Stals van Rooyen (Royal Cape) continued with his recent fine run of form – matching Jack’s 70. An interesting observation was that the top 3 finishers all eagled the same hole – the 455 metre par 5 6th!

Other noteworthy results was the B division winner, Jean-Guido Tobias (Somerset West), on gross 79, the C division victor was Jethon Williams (Atlantis) on 40 points. The U13s was as usual a tightly fought affair with Arman Patel (Steenberg) taking the U13A title on 77 gross (counting out Victor Venter on the same score) whilst the U13B winner was 11 year old Joel Neethling (Rondebosch) of 37 points (counting out Codi Ruiters on the same score)

The next WP Junior Golf event is the popular ERINVALE Junior Championship on Sunday the 1st May.