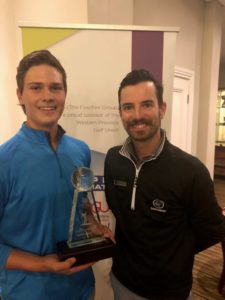 Playing in the last group at yesterday’s Premier Amateur Tour (PAT), Steenberg Open, Durbanville’s Tyran Snyders thought he had squandered his chance to win on the PAT.

He had a one-shot lead over the field going into his final hole, and after three putting for a six on the par 5, 18th hole, he had now put himself in a play-off with fellow juniors, Sam Simpson and Sean Cronje.

With the light fading rapidly a two-putt par in the play-off was eventually enough for Snyders to pick up his Open win. He had carded rounds of 70 & 69 (139) in regulation play.

Snyders form has continued from the WP Amateur Stroke Play held at Milnerton last month where he had his highest finish in a national tournament with rounds of 74-66-70-62. His, bogey free, final round 62, was a course record – he shares the record with the Amateur Champion, Wilco Nienaber who signed for a first round 62 in the same tournament.

Bellville’s Sam Simpson, who had only the day before returned from the Challenge IPT in Irene, jumped up the leaderboard with an eagle of the par 5, 12th and put himself into contention.

Durbanville junior, Sean Cronje played his best golf in the morning round. Leading at five-under-par after 18 holes, he was unable to maintain that momentum and signed for a 67 & 72 (139). He had a nervous wait in the clubhouse as Snyders was in the last group to finish.