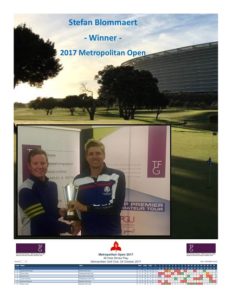 Dramatic finish for Stefan Blommaert at the Metropolitan Open on Sunday.

He becomes another first-time winner on the Premier Amateur Tour – 69-64 (133)  A spectacular eagle on his final hole secured a two shot victory from Clovelly’s winner Chris Wicks. Stefan drove the par 4, 4th and holed his 5m downhill putt, with a break of 1/2 a metre for the win.

It was the only eagle on the hole, as most players were three putting due to the huge break and the downhill slope