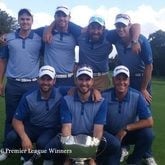 Looking for three wins in a row, defending champions, Westlake will want to take full points from their matches against Clovelly and Durbanville when they tee up in their first-round fixture in the Premier League which starts on Sunday.

Newly promoted Strand face up against a strong Bellville team, and Royal Cape.

In the final logs of the 2016 league, both Westlake and Strand gained maximum points from all their matches to remain unbeaten in the season.

The traditional first round venue of Somerset West Golf club will pit the province’s top golfers against each other in the month-long league. The format of two-way matches can often make or break a team’s winning ambitions even in the first round. The morning Foursomes is followed by Singles in the afternoon.

There are several players representing different clubs this season – a Milnerton stalwart, Cameron Johnston, due to his new position as Golf Director at King David Mowbray, will pull on their colours;  and Michael Sherriff joins the Durbanville team from Bellville.

The Royal Cape team has been strengthened with Jason Mylroie, ex-Westlake, and Zack van der Schyff. And Strand, this year, are without the services of Terence Coutinho.

The WP Invitational team is a combination of youth and seasoned campaigners. Brian Mampies, Andrew Cleophas, Julian Visser, and Herman September will be assisted by the talented juniors, Bellville’s Sam Simpson and Somerset West’s Luke Pienaar.