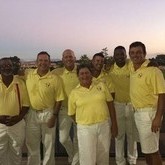 Rondebosch and their neighbour’s King David Mowbray squared off against each other at Durbanville for a place in next year’s Premier League.

King David Mowbray were unbeaten in the Premier Reserve league. It was their strong performance in the foursomes that proved the undoing of their opponents. Rondebosch, however, had a mixed season in the Premier league with their foursomes leaving them with too much golf in the singles.

King David Mowbray, seasoned veterans, Craig Poulton and Herman September were paired against the youngsters, Hilmi Mallick and Muj Agherdien. The veterans were too strong, and picked up a comfortable 4/3 win.

WP Mid-Amateur captain, Cameron Johnston and Quintin Webb had an up-and-down battle with Rondebosch’s Shane Howe and Kyran Hawkins, but the KDM pair won crucial holes at 14 and 16 to win 2/1, and took a 2-1 lead into the singles.

KDM went with their veterans upfront in the singles. Ockie Theron, Craig Poulton, Quintin Webb and Cameron Johnston were all up after 9 holes. Cameron Johnston had too much firepower for Kyran Hawkins, and beat him 7/5, followed closely by Quintin Webb who was in control from the start against Muj Agherdien and won 6/4.

With KDM only needing 1 point to gain promotion, Rondebosch had an uphill battle to turn it around. They made KDM work hard for that point as Hilmi Mallick proved too good against Herman September winning 1 up, and the battle of the captains, Wayne Melle and Ockie Theron finished all square after 18.

It was left to KDM stalwart, Craig Poulton to bring them over the line and into next year’s Premier league.  He beat AB Price on the 17th hole and the match 2/1. Shane Howe picked up the last point with a win over Marcelo Van Rooyen, 2/1.