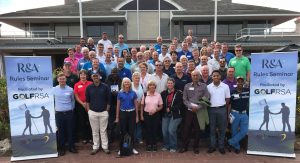 For the first time, a new Player’s Edition of the Rules of Golf is being introduced to provide a shorter, more user-friendly version of the Rules for golfers at all levels of the sport. This version, which will serve as the primary publication for all golfers, features:

A more intuitive organisation with ten simplified topical groupings
A “Purpose of the Rule” description at the top of each Rule, to better define why the Rule exists
Easy-to-follow, full-colour diagrams and charts
A simpler, more direct writing style.
New rulebook

Two million copies of the Player’s Edition will be distributed in the United States and its territories and Mexico by the USGA and a similar number in the rest of the world by The R&A, all with the support of Rolex. The new book will be translated into more than 30 different languages.

The Player’s Edition is being launched alongside the modernised full Rules of Golf book, which includes some of the most significant changes made to the Rules in more than 60 years.