Home > NEWS > SA no. 1 Son heads up field up at Ackerman Championships

SA no. 1 Son heads up field up at Ackerman Championships 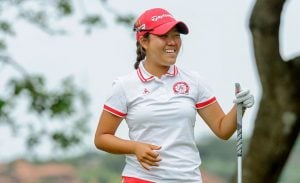 Not yet a winner this year, but a runner-up five times – maybe her fortunes will change with the 38th Ackerman Championships being played at Clovelly Country Club 13-14 October 2018.

Woo-Ju Son, SA’s top ranked women golfer heads up the field at this weekend’s 54 Hole Ackerman Championships. In her 16 tournaments played this year, Son has yet to win, however, she has never finished out of the top seven on the leaderboard.  It has been her consistency that has given her the top ranking.

She will have to battle it out with local favourites, Bellville’s Kaylah Williams and Durbanville’s Jordan Rothman, current SA Amateur Champion.  Ekurhuleni’s , Caitlyn McNab will want to make amends for losing out at the WP Championships held earlier this year.  Also, in the field is mid-amateur Vanessa Smith who’s long hitting maybe just what is needed at Clovelly with the expected windy conditions.

The Ackerman Championships has been proudly supported by Pick n Pay and the Ackerman family for 38 years and has become a ‘must play’ tournament on the women’s amateur golf circuit.