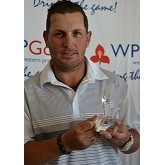 Both WP’s Cameron Johnston and KZN’s Derek Scullard were tied on two-under-par after the 36 holes regulation play and headed down the par 4, 10th to continue play.

Scullard hole two birdies on the final holes to put himself in the running.

Bellville’s Gerlou Roux 74-69 (143) bounced  back after trailing by three shots after round one, but his three-under-par 69, final round, wasn’t enough to take a spot in the play-off, and finished tied third with Westlake’s Shaun le Roux 72-71 (143).

Both McNeill and Gerlou Roux shot the lowest round of the tournament, carding three-under-par 69s.

With a day’s break, many of the players are heading off to Devonvale to do battle again in the Boland Mid-Amateur Championship, after which the WP Mid-Amateur team to play in the Inter-Provincial in October at Oubaai Golf Club.