Senger’s putter sizzles at the Strand 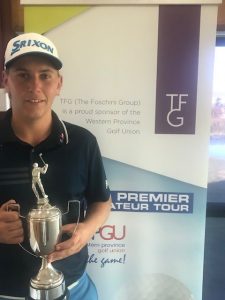 It became a race for second place as Durbanville’s Ayden Senger put together a round to remember at the opening tournament of the Premier Amateur Tour (PAT) Strand Open held on Sunday 7 April.

Senger raced through the course to post an opening round 65, which included six birdies and an eagle, and moved well clear of the field. His closest rival was Pearl Valley’s Keagan Thomas on 70.

With benign weather conditions all day, Senger’s second round didn’t quite have the same sparkle as his first, though he came through unscathed to card a two-under-par 70 (total 135) and walked away with the trophy.

Dandre Spies (Atlantic Beach) put in a late challenge with the lowest round of the afternoon with a five-under-par 67 – though he couldn’t put a dent in Senger’s lead as he was nine shots adrift at the halfway mark.

This was Senger’s second win on the PAT – his first was at PAT Durbanville Open in 2017.  It was a stark contrast to the winning score from last year – Tyron Davidowitz +7.