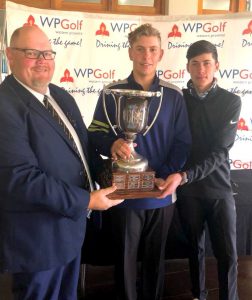 Sam Simpson and Ayden Senger teed up together at the Nomads WP Foursomes held at De Zalze Golf Estate on Sunday and put on an extraordinary display of golf.

With six birdies, an eagle and a lone bogey, they raced to the top of the leaderboard after round one with their 65, and never looked back. The afternoon round did, however, prove a little frustrating as their putters had turned a little cold as they tried to build on their morning round.  Had it not been for a double bogey on the 544m, par 5 17th they would have finished the tournament in double figures at 10-under-par. Final result 65-71 total 136.

The pair were five shots clear of Boland players, Hennie O’Kennedy and Tryon Davidowitz 71-70, who had also moved up the leaderboard and challenged the front runners. At one stage they were only one shot behind, but a string of four bogeys meant they had to settle for second position.

The Stellenbosch partnership of Luan Boshoff and Karl Osche were third on a 71-72, total 143.