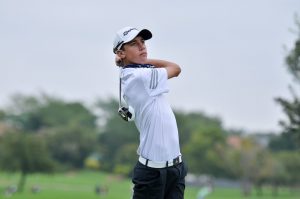 PRETORIA, 12 July 2018 – Sam Simpson must be relishing a victory after a flawless six-under-par 66 in the opening round of the Tshwane Junior Open put him the mix for a fourth straight week.

He racked up three birdies on the front nine, pencilled in a fourth red number on his card at the par four 12th and finished with a brace of birdies to set the first round target at Irene Country Club on Thursday.

Simpson has been trending towards a victory in the last month.

The Bridge Fund Managers Junior Series finalist backed up a third place finish in the Dimension Data Junior Open at the end of June with a tie for fifth in the Nomads SA Boys Under-17 Championship two weeks ago and finished sixth overall in the last Nomads Inland National Order of Merit event at Bryanston Country Club on Tuesday.

However, if the 16-year-old Bellville golfer wants to bag the Sunshine Tour Junior Series title in Friday’s final round, he will have to stave off the chasing pack, led by fellow Western Province junior Ayden Senger.

The Durbanville junior started on the 10th and raced to the turn with birdies at 10, 11, 14, 15 and 17 but his putter cooled down over the last nine holes. He bogeyed the fifth, but made up for the loss with a final gain set seven to post five-under 67.

Maas from Pretoria Country Club was impressive with a tie for eighth in the SA Boys Under-17, while Cronje from Paarl chased the leaders at Bryanston, finishing fourth. Maas carded a 69 and Cronje is four off the pace in joint fourth with Calvin Maia from Kingswood.

Christiaan Burke from North West, who edged out top ranked Martin Vorster in a play-off for victory at Bryanston, cannot be discounted, either. The Potchefstroom junior was three under through 17 holes before a double bogey at the closing hole saw him finish on one-under,

PHOTO – Samuel Simpson from Western Province fired a flawless 66 to lead the first round of the Tshwane Open at Irene Country Club; credit Ernest Blignault.