Simpson holds on to first win at Somerset West 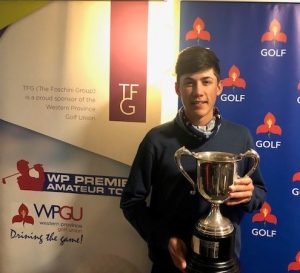 Simpson opened his rounds with a one-over-par 71, on the new Somerset West course, to share the morning lead with Dandre Spies.

The cold and windy conditions played havoc with Simpson’s afternoon round as he carded a seven-over-par 77 – he just managed to hold onto to win the trophy with a total 148, and one ahead of Weyers Janse van Rensburg.

Simpson finished in the runner-up spot at last week’s Westlake Open; and lost in a three-way play-off at the Steenberg Open. With this win under his belt, Simpson has moved up to fourth on the PAT Order of Merit.

For many golfers it was a game of two halves as the weather took its hold on the field.

Somerset West’s Isaac Bezuidenhoud bounced back from a morning round 79, to finish with a 71 (150).

Weyers Janse van Rensburg rebounded with a 72 after opening his tournament with a 77 to finish tied second with Durbanville’s ‘lefty’, Sean Howell on nine-over-par.

Dandre Spies dropped out of contention after his morning round of 71 – he carded an 85 in the afternoon; and Carlo O’Reilly found some normality after posting a morning round 82 to finish with a 72 total 152.