Simpson selected for All Africa in Egypt 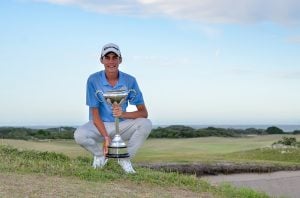 The event serves as the African Qualifier for the Toyota Junior Golf World Cup in Japan, where both the champions and the runners-up will have the opportunity to take on the cream of junior golf from six continents.

Jarvis and Simpson were members of the victorious GolfRSA Junior Team that won the African Qualifier and went on to triumph in the Toyota Junior Golf World Cup last year.

The duo, alongside Martin Vorster and Christo Lamprecht, ended an 18-year winning drought for South Africa and became the first boys team in the 27-year history of the illustrious event to break the 40-under-par barrier when they captured the title with a tournament record 41-under-par total.

“Casey and Sam represented South Africa with great honour on the international stage last year and we are delighted to have them spearhead our title defence in Egypt. We are also very excited to give Jordan and Christiaan another opportunity to represent the country and gain experience on the international stage,” said South African Golf Association president Naadir Agherdien.

“Casey and Sam were pivotal to last year’s winning performance in Japan. Sam was the top scorer for the team at the Chukyo Golf Club, winning the Individual Boys Competition by four shots on 18-under 266, while Casey, who was ill over the first two rounds of the competition, made a big contribution over the last two days to help the team to an 11-shot victory over Japan.

“Should we be successful in Egypt, their experience of the conditions and their intimate knowledge of the tough Ishino golf course will be of great importance in guiding Jordan and Christiaan through the challenges in this highly-rated world-class event.

“All four juniors will be representing South Africa in the 54-hole team competition at the African Amateur Stroke Play Championship at Leopard Creek from 3-6 February, which will go a long way in building their confidence for Egypt.”

“We are very excited to send this team to Egypt. They have all acquitted themselves very well over the past 12 months,” said Agherdien, who will accompany the team to Egypt.

“Casey has been a force in junior golf for some years now since winning the English Under-14 Stroke Play. He has won three Nomads SA Boys titles (U-13, U-15 and U-17) and made a spectacular start to the 2020 season. Following a tie for 36th in the South African Open Championship, he chalked up successive victories in the Free State and Gauteng North Opens to take the number one spot in the Open Amateur Rankings.

“Sam, Jordan and Christiaan were equally impressive in 2019. In addition to the success in Japan, Sam won the Nomads SA Boys Under-19 Stroke Play Championship, took the medalist honour in the Individual Competition at the All Africa Junior Golf Teams Championship and won silver with Martin Vorster in the Boys Team Competition in the Spirit International in the United States.

Maas broke through on the national circuit in the 2019 Dimension Data Junior Open at Fancourt and finished runner-up in the Nomads SA Boys Under-17 Championship.

“Christiaan also enjoyed an extremely impressive debut on the Open Amateur circuit last year with seven top 10s, including runner-up finishes in the Silver Salver and the Limpopo Stroke Play Championship,” Agherdien said. “And he made a strong start in 2020 with his five-shot victory first Nomads National Order of Merit Inland of the 2020 season at Benoni Country Club this month.

“All four juniors have made their mark with superb individual performances and their contributions in team events and have represented their respective provinces and South Africa with pride. We are confident that this team will do us proud in Egypt.”

“High expectations are part and parcel of the team representing us in the All-Africa Junior Golf Teams Championship, especially considering South Africa’s very proud track record in this prestigious tournament,” he said.

“This championship presents a fantastic development opportunity for our top juniors to test themselves against the best young golfers in Africa. Thanks to the incredible support GolfRSA receives from the golf unions, golf clubs, academies and coaches, these young men from our GolfRSA National Squad have begun to excel beyond our expectations.

“We know this quartet will do everything they can to keep South Africa’s winning streak alive and we are confident that they are up to the task at hand.”