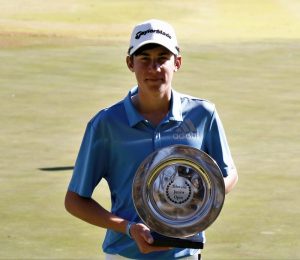 The 16-year-old Simpson stayed cool in difficult windy conditions to close with an even-par 72 to triumph on six under, with reigning Sanlam SA Amateur champion Germishuys relegated to second on his own after a final round 67.

Simpson had some close calls in the last three weeks, but it only made him more determined to get into the winner’s circle.

After a third-place finish in the Dimension Data Junior Open at the end of June, the Bridge Fund Managers Junior Series finalist led the field in the Nomads SA Boys Under-17 Championship with a red-hot seven-under 65 at Middelburg Country Club. He dropped out of contention with a second 77 but rallied with a final round 71 to tie for fifth.

On Tuesday, he closed out a joint sixth place finish in the final event on the Nomads National Order of Merit series and brought that form to Pretoria, where he rocketed into the first round lead with a flawless six-under 66.

Simpson’s breakthrough moved him from ninth to fourth in the SAGA Under-19 Junior Rankings and brought him closer to achieving his goal of representing South Africa in Italy later this year.

“I am so pleased and so relieved to get this win,” said Simpson. “I’ve had some opportunities in the last few weeks where I didn’t make the most of my chances, so it was really important to pull it through in this one.

“I was just trying to take it shot by shot and trying to ignore everything that was going on around me and that was key to the win. My goal this year was to try to move up the rankings so I could be considered for one of the four spots in the Reply Italian Under-16 Championship. I’m in a strong position now.”

Simpson started the final round with a one shot lead over Ayden Senger from Western Province and with two shots on Christiaan Maas from Gauteng North.

Germishuys was six off the pace after an opening 72, but the Strand golfer chipped away at the deficit with birdies at two, seven and eight. He gave a shot back at 14 after another gain at 13, but set the clubhouse target at five-under with a brace of birdies at 17 and 18.

In April, the two-time Nomads SA Boys Under-19 Stroke Play champion denied Simpson the chance to win the coveted start in the Junior North and South at Pinehurst when he chipped in to win the South Final of the Bridge Fund Managers Junior Series at King David Mowbray.

Two perfect shots at the penultimate hole gave Simpson the chance to turn the tables.

“I knew I was tied for the lead with Deon and I needed to birdie on of the last two holes to win,” said Simpson. “The par five was my best chance and I gave myself two putts for birdie. It was a huge relief when the putt dropped, because that took the pressure off for the last hole. It was so close, though.

“I learned a lot of things about my game so I think that really helped me play so well this week. It feels amazing to be a winner finally, after all those close calls.”