Six birdies – no bogeys for Senger 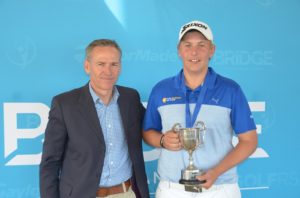 CAPE TOWN, 7 October 2017 – Ayden Senger strongly believes that a positive mind-set helped him to a Bridge Fund Managers Junior Series breakthrough at Clovelly Country Club and the Western Province standout is taking that same attitude into the Lion of Africa Junior Open on Sunday.

The Sunshine Tour Junior Series event tees off at the same golf course where 16-year-old Senger fired a flawless six-under-par 66 on Friday to lift the U-18 A-Division title in the sixth tournament on the new nationwide junior golf development series.

The two shot victory not only delivered a shot of confidence, but earned Senger the chance to fight for the chance to tee it up in the highly-rated Junior North and South Championship in the United States next year.

“This definitely takes the sting out of two huge disappointments this year,” said Senger. “I was very down on myself after I let the chance slip to win the Dimension Data Junior Open in July and I was devastated when I missed the cut in Italy last month.

“I was so proud when I made the team and I so excited about my first international tournament, but I made such a poor start and I missed the cut. It was a real kick in the gut, but talking it through with Eden and Theo really changed my attitude.”

“They both talked to me about having a positive mind-set and learning to let go of the bad stuff, because just holds you back,” said Senger.

“I took what they said on board and I decided to make the best of the trip. I caddied for Andre (van Dyk) on the last day and it was amazing how much I learned from walking the course and from watching how the top internationals players approached the course.

“Lana Orgovanyi at Durbanville Golf Club has been my coach for a long time and we’ve continued to work on strengthening the mental side of my game. When I teed it up at Clovelly, I felt positive and confident and I had a very simple game plan – to keep the mistakes to a minimum.”

Senger didn’t put a foot wrong as he outclassed a number of top ranked challengers.

The Western Province junior took the lead with birdies at one, five and seven and, although Lamprecht briefly took control with an eagle at the fifth, the Senger was back in the driver’s seat with birdies at nine and 10.

Fellow Western Province junior Deon Germishuys, a two-time winner on the series, the 2017 English Boys Under-14 champion Casey Jarvis from Ekurhuleni and Louis Oosthuizen Junior Golf Academy duo Jordan Duminy and Martin Vorster all made a charge. Vorster, who won the Italian U-16 Championship, got within two shots of Senger with a trio of birdies from 10, but his challenge lost steam after a bogey at 17.

“It was really a solid round of golf and I’m really proud of way I handled myself,” said Senger, who punctuated his bogey-free effort with a 12-foot putt for birdie at the final hole to seal the victory.

“In the past, I beat myself up about missed putts, but now I see things differently. Par is a good thing and bogeys are not the end of the world. You just have to get on with it and stay positive.

“I am really excited to have the chance to compete for the spot in the Junior North and South at Pinehurst. The way I see it, I’ve got a one in nine chance to win the Southern Regional Final. It’s a huge opportunity for one of us to travel to the USA to gain more international experience.”

Meanwhile, Senger is hoping for more success at Clovelly.

“I’m still chasing that first win on the Sunshine Tour Junior Series and I’d love to back-to-back at Clovelly,” he said. “It’s a very strong field, but I’ve proven to myself that I can beat the top ranked guys, so I’ll take a solid game and positive mind-set into the Lion of Africa Junior Open on Sunday.”