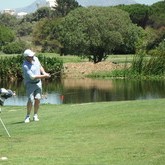 Coming straight out of the cold, Irish winter, defending champion, Garth McGimpsey was not phased by the high temperatures at the WP Senior Amateur Championships being played at King David Mowbray Golf Club.

McGimpsey rattled in three birdies, and then a string of 10 pars to sit one shot off the lead after round one and is tied second with Clovelly’s Jonathan Bernard on one-under-par 71.

The halfway lead is held by Francois le Roux, a previous winner of this championship, who carded a two-under-par 70.

Casper de Bruin, from Ceres, at one point held the lead at three-under-par, but two double bogeys cost him and sits four shots off the lead.

A very popular tournament on the Senior calender, this year’s Senior Championship boasts an international field. There is a ten-strong German group, with several Irish and European players.

Cooler weather (27°C) and not much wind is predicted for tomorrow’s final round, giving the chasing pack an opportunity to shoot low scores.

Prior to the tournament, Tuesday and Wednesday, a match was played between the German group and a WP Invitational team as a run-in to the championships. After the first round betterball matchplay the WP team lead 4.5/1.5, and wrapped up the match after the Singles 12.5/5.5.