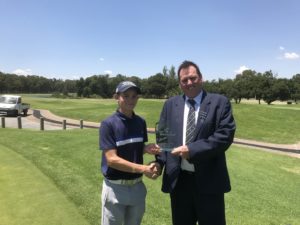 Spencer clinched the season-opening tournament at Benoni Country Club with a winning score of two-under-par 214 after a final round 70.

Spencer opened his season with rounds of 74 and 70 and he began the final round three off the pace from overnight leader and reigning Sanlam SA Amateur champion Christo Lamprecht.

A trio of birdies at the second, eighth and ninth holes moved him to three under, but he surrendered shots at 12 and 13. A cool head prevailed, though, and Spencer sunk a seven-footer at the final hole to beat South Africa’s number one ranked junior Jayden Schaper from Ekurhuleni and Brandon Greere from Mpumalanga by two strokes.

“The leaderboard was incredibly tight all day and victory could have gone to anyone, because the lead changed a lot,” Spencer said.

“Last year I finished second in the Nomads National Order of Merit at Modderfontein and challenged in the Lion of Africa at Clovelly and these experiences helped me a lot. I’m comfortable being in front and under pressure.

“I just aimed to get myself in contention. I battled with the putter over all three rounds, but a couple of putts dropped for me early on and I shared the lead after nine holes. I thought I’d blown it when I dropped 12 and 13, though.”

When Spencer reached the final hole, he was tied for the lead with Lamprecht at one-under.

“I had some chances down the back nine, but the putts stayed out, so this was do-or-die,” he said. “I needed a birdie to make a play-off, so I avoided the water down the left and hit it straight down the middle.

“I hit a rescue just down the left, which left me with 50 metres to the pin. I pitched it on the green and the ball finished about seven feet below the hole. And that putt dropped.”

When Lamprecht walked off the 18th with a double bogey, the victory was Spencer’s to savour.

“You feel for Christo, but he is a great player and he will bounce back,” said Spencer. “I’m really, really stoked about this win. I gained a lot of experience during the four months I spent at the Gary Gilchrist Academy in Orlando at the end of 2016 and this last year that learning curve continued. It’s great to start the season on such a high note.”

Greere closed with 71 and Schaper posted 72 to tie for second on even-par 216.

Lamprecht settled for a share of fourth at one-over with Luke Mayo from KwaZulu-Natal after a disappointing 76, while Deon Germishuys from Western Province, Southern Cape’s Jordan Duminy and Ekurhuleni duo Ryan van Velzen and Yurav Premlall closed out the top 10 at two over.