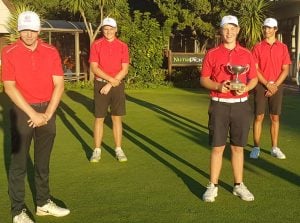 May the 2nd was a warm humid day and STEENBERG produced the hottest golf during the WP Junior Interclub Team Championship held at Parow Golf Club.

The format of the annual event was strokeplay, teams of 4 with the best 3 scores counting. Each club in the Western Province was invited to enter a team of 4.

In the individual stakes Christopher Gutuza (KD Mowbray A) produced a fine 2 under par 70 – 4 birdies and an eagle offset by 4 drop shots. Jaydon Galant finished 2nd on 71.

This year an Under 13 Teams format was added with DURBANVILLE the runaway winners from KD MOWBRAY “A” by 11 clear shots. The DURBANVILLE team comprised Francois Steyn (76) and Henru Walters (77). Noah Musikanth from the runner up team won the individual honours with a fine 75.

Thanks to those clubs and managers that supported the event.

Final Results are as follows: