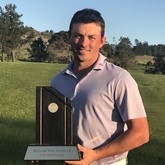 Still in shock over his first ever provincial victory, or any victory for that matter, King David Mowbray’s Ockie Theron demolished the field at the Boland Mid-Amateur Championship held at Stellenbosch Golf Club on Sunday.

The 31-year-old Theron, who is a regular player on the Premier Amateur Tour, played almost flawless golf to top the leaderboard 70-68 (138).  He played consistent golf with eight birdies and only two bogeys in the 36 holes.  Not phased by the difficult greens, he put the win down to his accurate driving and his consistent putting, and when he missed the fairway, he was able to get up-and-down with relative ease.

Theron came into the Championship with some form from the WP Mid-Amateur Championship held on Thursday last week at Steenberg where he finished T15th 72-79 (151).