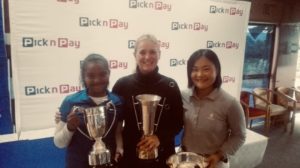 The Ackerman Championships has been sponsored by Pick n Pay and the Ackerman family for 39 years , and is always a must play tournament on the national calender, the 54 Hole event drew players from Gauteng, Gauteng North, Southern Cape, Boland and Western Province.