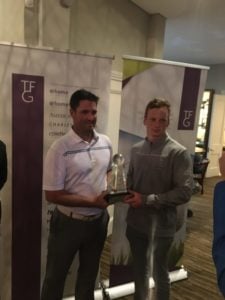 Mist delayed the start of the Steenberg Open, but that didn’t stop Paarl’s Ethan Smith and Royal Cape’s Cole Cruickshank sharing the first-round lead at three-under-par. Both players slotted five birdies to card opening rounds of 69.

Smith got off to a flyer in the afternoon with three birdies in a row, and turned six-under-par. Four bogeys in as many holes put a dent in his score to finish his round on one-over-par 73, total 142.

Three shots adrift after the halfway mark, Bellville’s Gerlou Roux moved his way up the leaderboard to take the lead but untimely bogeys on his last two holes meant he had to settle for a play-off with Ethan Smith.

Darkness prevented any further play after both players parred the first extra hole, and the trophy was shared.