Tryan Snyders wins in the States 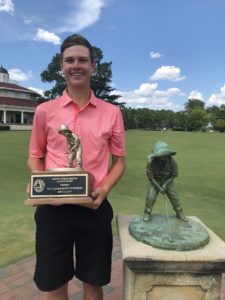 The 18-year-old Paarl teenager fired a flawless four-under-par 68 on Pinehurst No 8 in the final round to triumph by three shots on nine-under 205.

The historic victory continues the international winning streak for South Africa’s juniors after Martin Vorster won in the East of Ireland Amateur and the GolfRSA Junior Proteas lifted the Toyota Junior Golf World Cup in Japan in June.

Snyders shot straight to the top of the leaderboard with a 67 in the opening round, which was also played at Pinehurst No 8.

The second round was played at Pinehurst’s iconic No 2 course, which hosted the Ryder Cup in and the US Open in 1999, 2005 and 2014, and Snyders put together a patient and steady even par 70 to open up a two shot lead on the field.

During the final round, six players dipped under par, but the Durbanville Golf Club junior did not drop a single shot and kept his closest challenger, Jolo Magcalayo from the Philippines, at arms-length with a brace of birdies at seven and eight and further gains at 13 and 17.

Not only will his name be emblazoned in bronze on the Perpetual Wall in the Heritage Hall of Pinehurst’s main clubhouse, but the victory earned Snyders a return trip to Pinehurst Resort for the 2020 Men’s North & South Amateur.

The Durbanville golfer was pleased as punch with his international breakthrough.

“I haven’t won a national tournament at home, so to come to America for the first time, to contend and to keep it together and win is pretty special,” he said.

“Standing on the first tee at Pinehurst No 2 was pretty intimidating, but at the same time, I was quite excited to play, especially being in the lead. I played with Jolo and I could see he was a really good and steady player. I knew I would have to play really good golf to win. He only made one bogey all day, and I knew I had to do pretty much the same. And I did – no bogeys.

“This has been an amazing trip and I am so grateful. I can’t thank Bridge Fund Managers enough for giving our juniors a chance to compete for this experience. It was incredible to tee it up in a tournament where you rub shoulders with the cream of US junior amateur golf. This is undoubtedly the highlight of my career and I couldn’t be happier.”

The Benoni golfer opened with a 74, claimed the low round honours at Pinehurst No 2 in the second round with a two-under 68 and closed with a 73 for a final score of one-over 215.