Two Jacks on top of the Pack 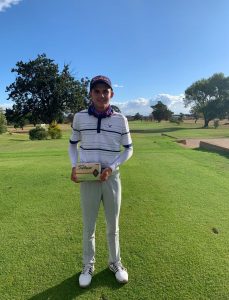 It took 22 holes to finally decide the winner of the SOMERSET WEST Junior  Championship on a perfect golfing day at Somerset West Golf Club, yesterday the 14th February.

After regulation play Jack Buchanan (Milnerton) and Jack Brugman (Strand) were tied on 5 under par 67. Both players had 7 birdies and 2 dropped shots in their rounds, with a 3 metre putt on the last hole allowing Jack Buchanan to get into the play-off.

Jack Buchanan is currently 1st on the WP Junior Golf OoM whilst Jack Brugman has moved up to 4th place.

The perfect weather saw some great scoring on the day – Craig Jacobs (Bellville) 68, Liam Adonis (Atlantis) a 69, whilst there were 3 players on 70.

The B division was won by Ethan MacGregor (KD Mowbray) on a respectable gross 79, whilst the C division winner was Mogammed Peterson (Fairview) on 44 points.

In the U13s 9 year old AJ van Emmenis, visiting from the UK, recorded a brilliant 71 with Henru Walters (Durbanville) in close pursuit on 72.