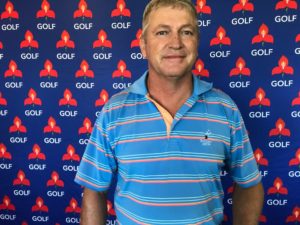 Stanley De Beer and Ralph Fransman share the lead after carding matching 73s in the first round of the Western Province Senior Open at Rondebosch Golf Club on Thursday.

A howling wind greeted the field and made for extremely difficult scoring. That not a single player managed to break par is testament to just how difficult Rondebosch can play when the wind gets up.

De Beer, who plays out of the Links at Fancourt made a steady enough start to his day thanks to a birdie at the par-5 3rd – one of only a few red numbers on the hole for the day. Despite being set-back somewhat by bogies at the sixth, ninth, and 12th, De Beer carded a magnificent eagle on the par-5 13th to hold his round together. The four pars which followed suggested a level-par round may in the offing but a closing bogey put paid to such notions.

“I just stayed out of trouble,” commented De Beer. I clubbed right into the wind and downwind and made a good birdie on 3 after hitting a good downhill putt. The turnaround on the back-nine came when I eagled the 13th, I chipped in from just over the back which was a nice little momentum-setter.

As for the final round, De Beer believes adapting to conditions on the day will be the key.

“If the wind is blowing tomorrow, I’ll just try and do the same. If the wind isn’t blowing, I’ll play accordingly,” he said.

Level with De Beer on 1-over par is Ralph Fransman. The Somerset West member had a topsy-turvy outing as he mixed five bogeys with four birdies. Nevertheless, Fransman will be pleased that he is right there heading into the final round.

There are a whole host of players within striking distance of the pair atop the board with no fewer than 10 players within four shots of the lead. With winds expected to be around 25km/h for the final round, it is indeed still all to play for at the Western Province Senior Open.

Written and released by Craig Stirton on behalf of Western Province Golf.