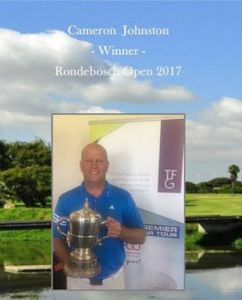 Cameron Johnston was a cut above the rest of the field at the Rondebosch Open on Sunday.

There was a group of three players, which included Ayden Senger, winner of the Durbanville Open tied on +3.

Rondebosch Open was a significant milestone in the Premier Amateur tour as it was the 100th Open since its inception in 2011.

There have been 46 different winners over the seven years with Sean Bradley winning the most at 7 Opens (which included a record four wins-in-a-row) followed by Altin van der Merwe, Gerlou Roux, JP Strydom and Le Riche Ehlers with winning six a-piece.

The 2017 Premier Amateur Tour has been the most competitive with 8 first time winners out of the 14 opens.