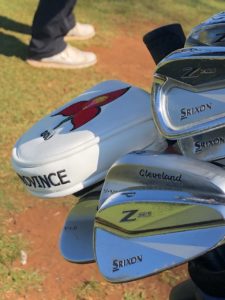 For fourth successive day, the GolfRSA Juniors were simply unstoppable as they charged to a 9 – 3 victory against Central Gauteng.

Ben van Wyk was two down with two to play and birdied 16, but Steven le Roux won the match when the pair halved the closing hole in pars. Christiaan Burke, playing at number one, lost to reigning Boland Open champion Karabo Mokoena, who finished birdie-birdie to win 2-up.

The GolfRSA Presidents Team drew their first round match against Western Province and their second round tussle with Central Gauteng also ended in stalemate, but the 8 – 4 loss to the GolfRSA Juniors in round three was just the spark the youngsters needed to defeat Gauteng North for their first victory in this year’s tournament.

The two teams headed into the Singles at 2-all, but it didn’t take long for Bridge Fund Manager Junior Series winner Nikhil Gopal, playing at eight, to oust Antoine Sale 5 & 3. Aneurin Gounden, competing at seven, followed suit to beat Kifentse Nukeri 5 & 3 and Kieron van Wyk kept the momentum going for the team when he defeated Gianni Pera 4 & 3.

Stals Swart hit back for Gauteng North, defeating Lwazi Gqira 6 & 4 and Wessel Duvenhage at number one gained another point for the Daisies when he knocked out Siyanda Mwandla 2 & 1.

However, Jordan Duminy and top Kenyan amateur Daniel Nduva both won 2 & 1 to keep the GolfRSA Presidents Team ahead and Carl Mwale nailed down the 7.5 – 4.5 victory when he squared his game against Kelso Hannay with a solid par at the 18th hole.

USSA led the Foursomes against Western Province 2.5 – 1.5, but had to fight hard to seal a 7 – 5 victory after the two-time winners rallied hard in the Singles.

Just Lieben Sheard and Jason Broomhead managed to close out wins, while James Kennedy, Reece Haikney, Calvin Ferreira, Phillip Swanepoel and Altin van der Merwe made up the remaining 2.5 points with halves. Samuel Simpson was the only player to win a game for Western Province when he defeated Gregg Gilson 4 & 3.