USSA and Central Gauteng get back in the fight at Irene 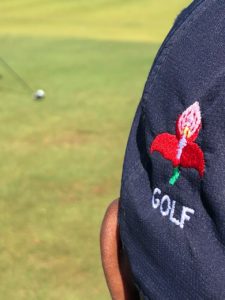 TSHWANE, 15 May 2018 – University Sports South Africa and Central Gauteng both came up trumps on day three of the SA Challenge Cup as the GolfRSA Juniors continued their unbeaten run in the 16th edition of the team’s event at Irene Country Club on Wednesday.

The GolfRSA Juniors mowed down the GolfRSA Presidents team 8 – 4 to remain in the top spot on the grid. The defending champions have six points in hand and lead by two from University Sports South Africa (USSA), who defeated Gauteng North 7 – 5.

Gauteng North had the upper-hand with 2.5 points from the Foursomes, but USSA struck back in the Singles to win the match.

Calvin Ferreira and Gregg Gilson both won 4 & 3 to put USSA on the attack and James Kennedy continued the beating when he beat Armand van Graan 2 & 1.

Reece Haikney, who captained the GolfRSA Juniors to victory at Atlantic Beach last year, downed Wessel Duvenhage 2-up to give USSA a total of 5.5 points.

Kelso Hannay and Gianni Pera reeled in 2 points for the Daisies, but Lieben Sheard guaranteed the win for USSA when he birdied the 18th to beat Antoine Sale 1-up. The final game between USSA number one Altin van der Merwe and Stals Swart ended all-square.

Central Gauteng carried a 3 – 1 lead into the Singles, but Western Province battled valiantly to make the five-time champions work hard for their win.

Keelan van Wyk turned the tide for Central Gauteng when he downed Samuel Simpson 3 & 2 and Haydn Driver levelled the match when he ousted Freddie Spencer 3 & 2. Shaun Jones and Cole Stevens won the final two games 2 & 1 to secure a 7 – 5 win.

However, Western Province held on to third spot in the log with 3 point, courtesy of a draw with the GolfRSA Presidents Team in round one and a second round victory over Gauteng North.

Central Gauteng, who lost to USSA on the opening day and drew with the GolfRSA Presidents Team in round two, moved to fourth with 3 points and is just half a games point behind Province.

For a third day running, the GolfRSA Presidents Cup team dominated the Foursomes to lead 3 – 1 and Carl Mwale took their tally to 4 points when he beat Saul Moss 5 & 4.