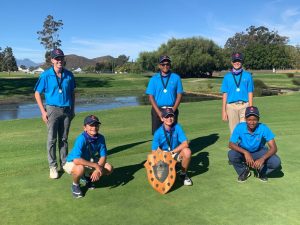 The annual Triangular was played this year at the scenic Robertson Golf Club. The host union, Boland, Southern Cape and Western Province compete against each other in the various age groups. The event was played in perfect golfing conditions.

The event goes back many years, being originally known as the Riversdale Triangular and being played at the 9 hole Riversdale Golf Club. The original format was Ryder Cup style (Betterball, Foursomes and Singles) but due to Covid, the event this year was played as 9 hole individual match play (over 5 rounds),  In addition the U13 age group was added this year.

This is the 3rd successive year that Western Province has won the overall event, after the move to Robertson Golf Club – no event was played in 2020.

In the individual age categories Boland won the U13s with Western Province 2nd. Booye Walters was the leading WP U13 player with a total of 7 points out of a possible 10.

In the other three age categories Western Province won – U15s Andries van der Vyver was impressive with a haul of 8 out of 10 points, U17 Jack Buchanan led from the front with an equally impressive 8.5 points whilst Jan Stals van Rooyen and Christopher Gutuza in the U19s both got 7.5 points.

The most competitive division, the U17 age group, was decided by the final putt with Jack Buchanan, in the final group, winning both his matches. The final three U17 players, namely Jack Buchanan, Jack Brugman and Matthew Lotz “pulled a rabbit out of the hat” by winning by overall a half point! These 3 players on the final day scored 11.5 out of a possible 12 points – a truly remarkable performance.

The final scores were

To view the players individual performances and scores please go to https://www.westernprovincegolf.co.za/juniors/tournaments-results/ click on the “I” next to the tournament and click on the PDF link.

Congratulations to our u15 side for their fantastic performance and for flying the WP flag with pride.