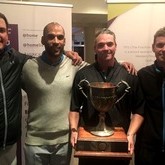 It was success for the experienced Westlake A team at the Winter League held at Erinvale on Sunday.
Weather usually steals the headlines at an Erinvale tournament, not the case this year. With the eagerly awaited rain arriving earlier in the week, there were ominous signs of another cancelled event.

However, play got underway, but conditions were less than ideal. With cold temperatures and a stiff north-wester blowing, it certainly showed in the scoring.
Headed up by Elton James, together with Brent Kirstein, Pietie Loubser and Shaun le Roux, the Westlake team narrowly edged out the Strand combination of Deon Germishuys, Marius Lourens, Bruce Pritchard and Gerhardus Lotter. Milnerton A were two shots further back.
Rondebosch’s Kyran Hawkins headed up the individual leaderboard with a total 150 (74-76), but with no backing from his team mates Rondebosch finished in 6th position.
It was a tale of two rounds for many of the players. Strand’s, Deon Germishuys fired a one-over-par 73 in the morning, but dropped six shots in the afternoon.
Durbanville’s Adam Botha dropped one shot in the morning, but dropped six shots in the afternoon.
One of the biggest turnaround for the leaders was Westlake’s Pietie Loubser, twelve-over-par in the morning he improved by eleven shots in the afternoon (84-73).
Cameron Johnston (KD Mowbray) also got a better hold of his game in the afternoon, ten-over-par and level par (82-72)
And not forgetting, at the back end of the field, Cape Peninsula’s Richard Veldsmann improved his score by twenty shots.