Weyers outplayed the field at Steenberg 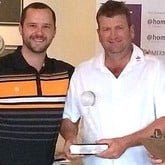 Just weeks ago, a runner-up at the Milnerton Open, and now his first win on the Premier Amateur Tour (PAT), Weyers Janse van Rensburg outplayed the field with a 6-under-par (69-69) total 138 to win by three shots from Durbanville’s Chris Wicks.

Both players shared the lead at the halfway mark on three-under-par; it was then van Rensburg stepped up a gear and after turning on a one-over-par, 37 he rattled in four birdies in his final nine holes for an inward 32 to seal the victory.

Van Rensburg was recently selected to represent WP Golf at the Mid-Amateur Inter-Provincial to take place at Oubaai Golf Estate in October.

Chris Wicks heads up the PAT Order of Merit followed closely by Van Rensburg and with only six events remaining on the PAT, it is still anybody’s guess as to who will take top honours at the end of the season.