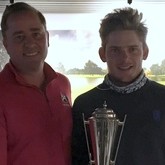 It could have been anybody’s tournament after the opening round at the Premier Amateur Tour (PAT) Westlake Open held on Sunday.

There was a group of eleven players all within one shot of each other. The leaders, Glen Campbell, Elton James, Brent Kirstein and Adrian Ford all carded one-under-par 71s, followed by Chris Wicks, Sam Simpson and Marius Lourens on level-par.

With birdies on 1, 3, 5, 7, and 13 in his first round, it looked as though Adrian Ford would continue his run of form from the Parow Open but he struggled with his putter in the afternoon to finish with a five-over-par total (71-78) 149.

Drew Denyer made a run at the leaders as he started his second round with three birdies – however, two double bogeys, and several bogeys later put him out of the running.

Glen Campbell dropped out of contention with a six-over-par 78 second round.

Despite two eagles on the 446m, par 5, 13th Elmo Barnard couldn’t shake off the bogeys in his game to make any headway up the leaderboard.

At one stage, Bellville junior, Sam Simpson was a contender.  At level par and with nine holes to play, he had a rash of bogeys and then an eight on the 9th, his final hole, which thwarted his challenge for the title.

A late withdrawal gave Darren Dunlop an opportunity to play; he carded rounds of 73-72 (145) and finished in third position, one ahead from King David Mowbray’s Cameron Johnston.

So, it was left to Durbanville’s Chris Wicks, and Elton James.  It seemed to be Wicks’ tournament for the taking. He had a two-shot lead until a bogey on the par 3 15th, and another one on 16.  Nothing separated the players until Wicks birdied the par 3, 17th which gave him a one-shot lead going into the final hole.

The drama wasn’t over yet –  Wicks failed to get up and down on the par 4, 18th, and now found himself in a play-off against Elton James. He took two holes to dispatch James to the runner-up position and win his second Premier Amateur Tour title.